Humayun’s Tomb, located in New Delhi, is a UNESCO World Heritage Site visited by tourists from across the world. The symbol of beauty, the tomb was the first of its kind, built in the garden style by the first wife of the Mughal Emperor Humayun.

His widow Haji Begum ordered the construction of the tomb some nine years after the death of the emperor. The construction period lasted seven years from 1565 AD to 1572 AD. After her death, a tomb was built for her on the same site.

Additionally, the complex now includes the monuments of Isa Khan Niyazi, Dara Shikoh, Alamgir, and other members of the Mughal kingdom. With a gorgeous garden and magnificent architecture to marvel at, this majestic tomb in Nizammudin East is a must-see for everyone. Guides are easily available in the area, as it is a famous tourist place. They need to be paid a particular amount, and they will explain its history and relevance in your preferred language. Summers should be avoided as Delhi witnesses intense heat at this time of year. The winter months from October to March are ideal for visiting the city, as the climate becomes mild and favorable. This makes the atmosphere of the city suitable for sightseeing. Evenings are a great choice for visiting the tomb and exploring the lush green garden.

The Humayun Tomb is in the center of the city and can be easily reached by metro. The closest stops are the Race Course and Jorbagh stations. There are many buses that stop on the way through this place as well. The Nizammudin stopping is another way to get to the area by train. Also, there are always enough carts and taxis available to get to the tomb. 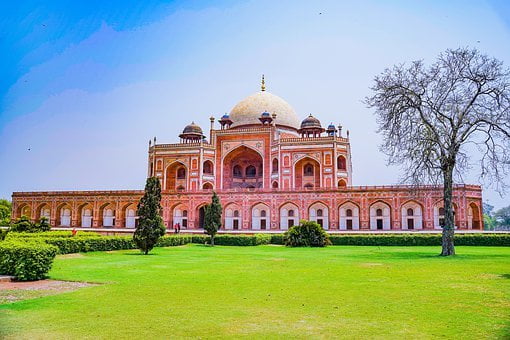 Thus, Humayun’s Tomb is a majestic place with a lot of charm and splendor, that will surely amaze you. A visit is a must for anyone interested in history, culture, and kingdoms. And, even if you aren’t, then also you should visit it because it will be an enriching history lesson and a great getaway. So, make sure to visit it on your next trip to Delhi.

There are many other phenomenal monuments in Delhi. Do check out our Blog on India Gate.