Reportedly, the free-willed, jolly street of Venice beach with amazingly colourful street performers have popped up with the terror of increasing. The reasons for these kinds of crime rates are mainly due to some “dangerous” homeless encampments. All this amid a series of crimes and drug use in the area, create a sense of unsafety.

As reported by Fox News, over five years, the homeless population has increased by 50 per cent. On the same hand, crimegrade.org classifies Venice beach under a D+ grade. The D+ grade means the rate of crime is slightly higher than the average US city.

People report that the crowd and the mood are particularly different at night than on days, and not in a good way.

Reports have shown that many of the people in Venice beach are usually skin regressors. There have also been many cases of people being mugged at night. This makes it an even bigger issue. Many people from there quote “worried of robbery in the late hours of being in the wrong place at the wrong time”.Statements like these are listed as concerns by many of them.

A large selection of people who live near the boardwalk area report that there have been multiple stabbings. Sometimes shootings and fires in the area, and sometimes even drug dealing and vandalism can be heard of.

People straight up recommend not to visit the beachside at night. Even after being patrolled completely by the local authorities, many cases as listed below still remain. 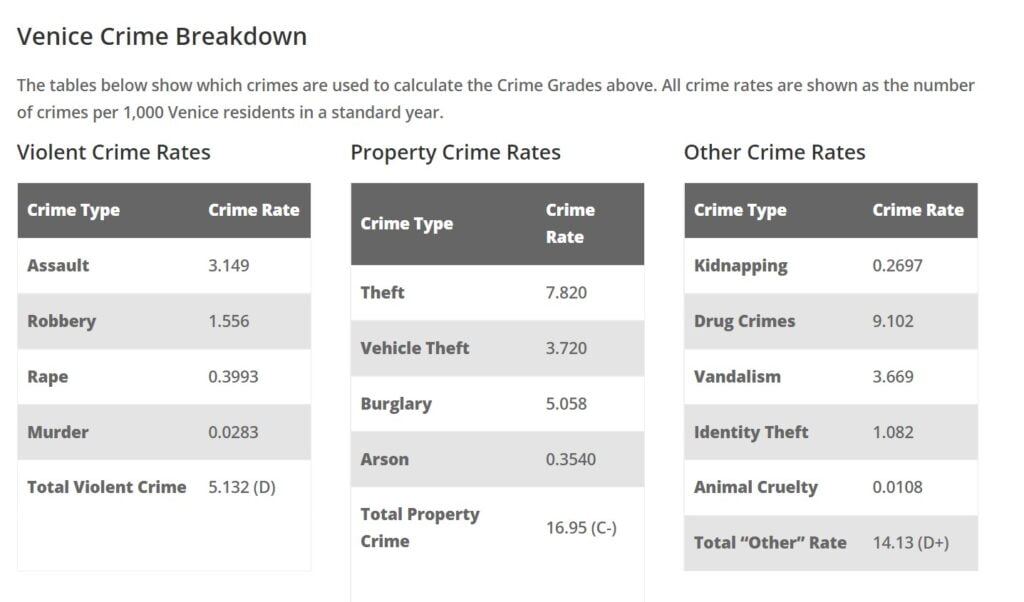 Should You Visit Venice Beach?

Thanks to the patrolling, the crime rates have halved and but it still remains. All the public freakouts and the authorities acting on it has made the crime rates and the homeless people departing the site. People have felt safer recently, now more than ever and tourists have started returning to enjoy the bliss given by this exotic beach in LA.

Despite all this, there are many crimes reported every now and then. When someone visits the area, it is highly recommended that they keep their street smarts and their guard up as they roam.

It is still not highly recommended to roam at Venice beach since it still is a high crime zone in Los Angeles.

Check out how other places like Death Valley are a tad bit dangerous for you.