The Mahabodhi Temple (literally: “Great Awakening Temple”) or the Mahabodhi Mahavihar, a UNESCO World Heritage Site, is an ancient, but much rebuilt and restored, Buddhist temple in Bodh Gaya, marking the location where the Lord Buddha is said to have attained enlightenment Bodh Gaya is about 96 km from Patna, Bihar state, India.

The site contains a descendant of the Bodhi Tree under which Buddha gained enlightenment, and has been a major pilgrimage destination for Hindus and Buddhists for well over two thousand years, and some elements probably date to the period of Emperor Ashoka (died c. 232 BCE). 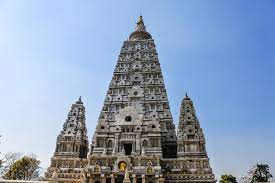 What is now visible on the ground essentially dates from the 7th century CE, or perhaps somewhat earlier, as well as several major restorations since the 19th century. But the structure now may well incorporate large parts of earlier work, possibly from the 2nd or 3rd century CE.

The Mahabodhi Temple Complex is one of the four holy sites related to the life of the Lord Buddha, and particularly to the attainment of Enlightenment.

The first temple was built by Emperor Asoka in the 3rd century B.C., and the present temple dates from the 5th or 6th centuries. It is one of the earliest Buddhist temples built entirely in brick, still standing in India, from the late Gupta period. What Is The Architectural Style Of The Mahabodhi Temple?

The Mahabodhi Temple Complex, Bodh Gaya lies 115 km south of the state capital of Bihar, Patna and 16 km from the district headquarters at Gaya, in Eastern India. The property encompasses the greatest remains of the 5th-6th century A.D in the Indian sub-continent belonging to this period of antiquity. The property has a total area of 4.8600 ha.

Mahabodhi Temple is constructed of brick and is one of the oldest brick structures to have survived in eastern India. It is considered to be a fine example of Indian brickwork, and was highly influential in the development of later architectural traditions.

According to UNESCO, “the present temple is one of the earliest and most imposing structures built entirely in brick from Gupta period” (300–600 CE).

Mahabodhi Temple’s central tower rises 55 metres (180 ft), and were heavily renovated in the 19th century. The central tower is surrounded by four smaller towers, constructed in the same style.

The Mahabodhi Temple is surrounded on all four sides by stone railings, about two metres high. The railings reveal two distinct types, both in style as well as the materials used.

The older ones, made of sandstone, date to about 150 BCE, and the others, constructed from unpolished coarse granite, are believed to be of the Gupta period.

The Main Temple wall has an average height of 11 m and it is built in the classical style of Indian temple architecture. It has entrances from the east and from the north and has a low basement with mouldings decorated with honeysuckle and geese design. Above this is a series of niches containing images of the Buddha.

Further above there are mouldings and chaitya niches, and then the curvilinear shikhara or tower of the temple surmounted by amalaka and kalasha (architectural features in the tradition of Indian temples). At the four corners of the parapet of the temple are four statues of the Buddha in small shrine chambers. 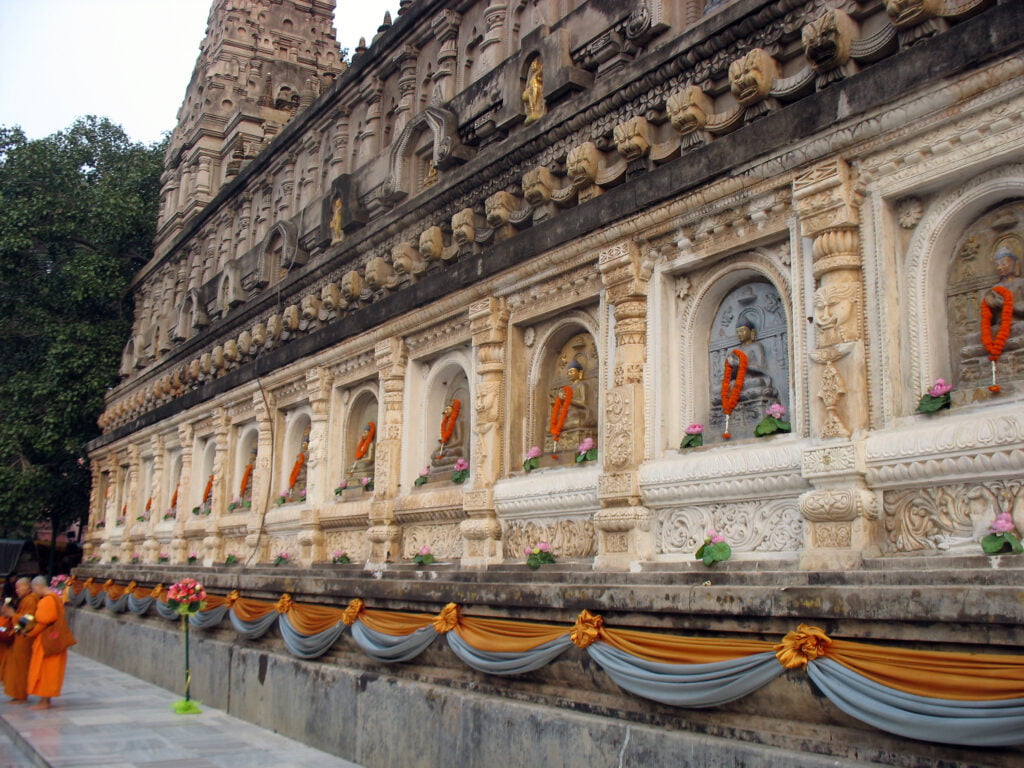 A small tower is built above each of these shrines. The temple faces east and consists of a small forecourt in the east with niches on either side containing statues of the Buddha.

A doorway leads into a small hall, beyond which lies the sanctum, which contains a gilded statue of the seated Buddha (over 5ft high) holding earth as witness to his achieved Enlightenment.

Above the sanctum is the main hall with a shrine containing a statue of Buddha, where senior monks gather to meditate.

From the east, a flight of steps leads down through a long central path to the main temple and the surrounding area. Along this path there are significant places associated with events that immediately followed the Buddha’s Enlightment, together with votive stupas and shrines.

The older railings have scenes such as Lakshmi, the Hindu/Buddhist goddess of wealth, being bathed by elephants; and Surya, the Hindu sun god, riding a chariot drawn by four horses.

Images of the site include Avalokiteśvara (Padmapani, Khasarpana), Vajrapani, Tara, Marichi, Vajrapani, Yamantaka, Jambhala and Vajravārāhī. Images of Vishnu, Shiva, Surya and other Vedic deities are also associated with the site.

If you want to visit anothe one of India’s amazing architectural miracle, go to this article and read about The Taj Mahal.

What Is The Current Status Of The Temple?

The Bihar state government assumed responsibility for the protection, management, and monitoring of the temple and its properties when India gained its independence.

Pursuant to the Bodh Gaya Temple Act of 1949, such responsibilities are shared with the Bodhgaya Temple Management Committee, and an advisory board.

The committee, which serves for a three-year term, must by law consist of four Buddhist and four Hindu representatives, including the head of Sankaracharya Math monastery as an ex-officio Hindu member.

A 2013 Amendment to the Bodhgaya Temple Management Act allows the Gaya District Magistrate to be the Chairman of the committee. The Advisory Board consists of the governor of Bihar and twenty to twenty-five other members, half of them from foreign Buddhist countries.

In June 2002, the Mahabodhi Temple became a UNESCO World Heritage Site. All finds of religious artifacts in the area are legally protected under the Treasure Trove Act of 1878.

The temple’s head monk, Bhikkhu Bodhipala, resigned in 2007 after he was charged with cutting the branches of Holy Bodhi Tree on a regular basis and selling them to foreigners for significant amounts of money.

A newspaper alleged that wealthy Thai buyers bought a branch with the cooperation of senior members of the temple’s management committee.

While the temple’s spokesman stated that botanists had pruned the tree, the Bihar home secretary ordered the tree examined. A criminal charge was filed against Bodhipala. If convicted, Bodhipala would be subject to at least 10 years’ imprisonment.

Following the expiration of the committee’s term in September 2007, Bihar’s government delayed appointing a new Committee and the district magistrate administered the temple pending such appointment. Eventually, on May 16, 2008 the government announced the appointment of a new Temple Management Committee.

As of June 2017, the Temple’s head monk was Bhikkhu Chalinda.

If you are a spiritual tour and want to visit a spiritual place, then this place is a must visit.