An immense mausoleum of white marble, built in Agra between 1631 and 1648 by order of the Mughal emperor Shah Jahan in memory of his favourite wife, the Taj Mahal is the jewel of Muslim art in India and one of the universally admired masterpieces of the world’s heritage.

The Taj Mahal, which was constructed in 1632 by Emperor Shah Jahan in memory of his wife Mumtaz Mahal, had been initially named ‘Roza-e-Munavvara’ which means Unique Building, but was then renamed by Shah Jahan as Taj Mahal as a loving tribute to his wife for whom his love surpassed all belief.

The Taj Mahal is located on the right bank of the Yamuna River in a vast Mughal garden that encompasses nearly 17 hectares, in the Agra District in Uttar Pradesh. 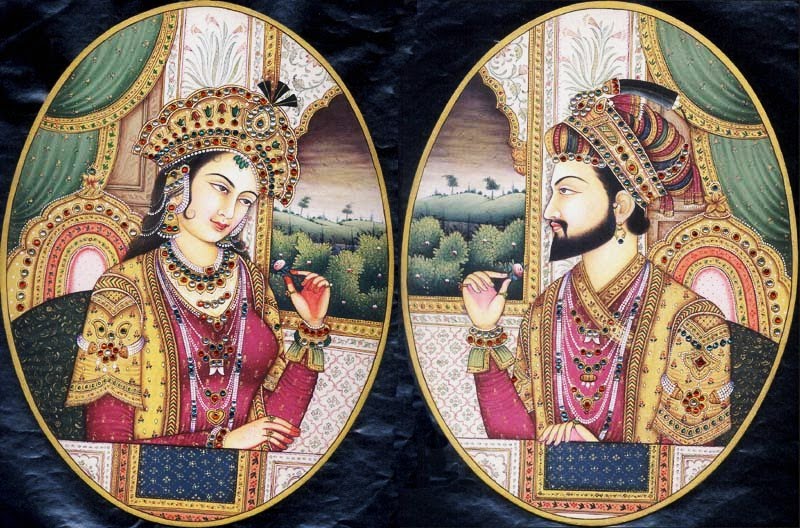 It was built by Mughal Emperor Shah Jahan in memory of his wife Mumtaz Mahal with construction starting in 1632 AD and completed in 1648 AD, with the mosque, the guest house and the main gateway on the south, the outer courtyard and its cloisters were added subsequently and completed in 1653 AD.

The existence of several historical and Quaranic inscriptions in Arabic script have facilitated setting the chronology of Taj Mahal.

For its construction, masons, stone-cutters, inlayers, carvers, painters, calligraphers, dome builders and other artisans were requisitioned from the whole of the empire and also from the Central Asia and Iran. Ustad-Ahmad Lahori was the main architect of the Taj Mahal.

The Architecture Of Taj Mahal

The Taj Mahal is considered to be the greatest architectural achievement in the whole range of Indo-Islamic architecture. Its recognised architectonic beauty has a rhythmic combination of solids and voids, concave and convex and light shadow. 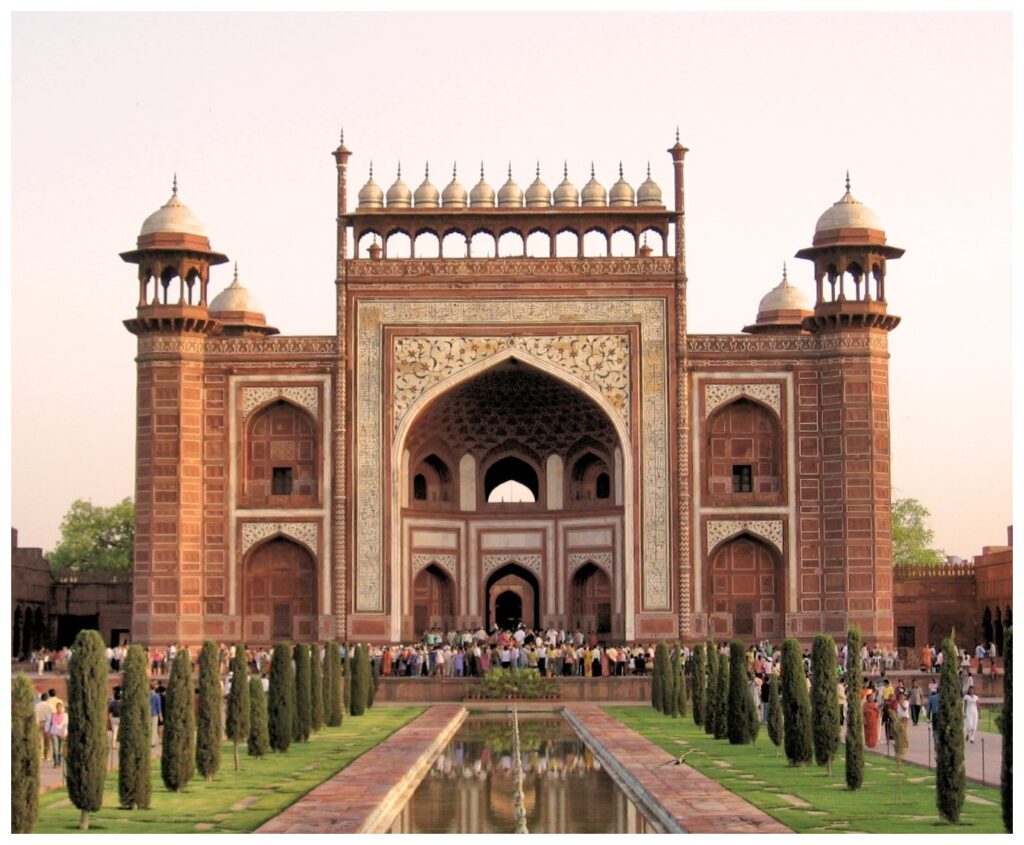 The colour combination of lush green scape reddish pathway and blue sky over it show cases the monument in ever changing tints and moods. The relief work in marble and inlay with precious and semi precious stones make it a monument apart.

The uniqueness of Taj Mahal lies in some truly remarkable innovations carried out by the horticulture planners and architects of Shah Jahan.

One such genius planning is the placing of tomb at one end of the quadripartite garden rather than in the exact centre, which added rich depth and perspective to the distant view of the monument. It is also, one of the best examples of raised tomb variety.

The tomb is further raised on a square platform with the four sides of the octagonal base of the minarets extended beyond the square at the corners. The top of the platform is reached through a lateral flight of steps provided in the centre of the southern side.

The ground plan of the Taj Mahal is in perfect balance of composition, the octagonal tomb chamber in the centre, encompassed by the portal halls and the four corner rooms. The plan is repeated on the upper floor. The exterior of the tomb is square in plan, with chamfered corners.

If you want to read more about India, do follow this article where we talk about how India is like a world within itself.

The large double storied domed chamber, which houses the cenotaphs of Mumtaz Mahal and Shah Jahan, is a perfect octagon in plan.

The exquisite octagonal marble lattice screen encircling both cenotaphs is a piece of superb workmanship. It is highly polished and richly decorated with inlay work. 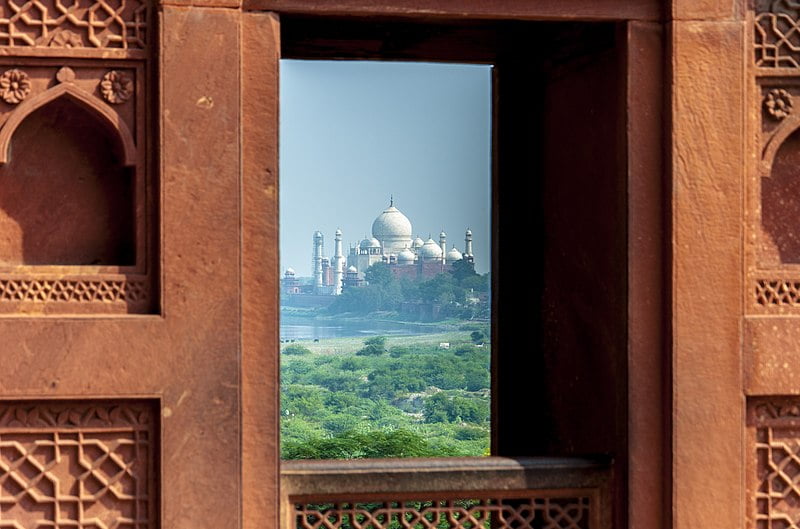 The borders of the frames are inlaid with precious stones representing flowers executed with wonderful perfection.

The hues and the shades of the stones used to make the leaves and the flowers appear almost real.

The cenotaph of Mumtaz Mahal is in perfect centre of the tomb chamber, placed on a rectangular platform decorated with inlaid flower plant motifs.

The cenotaph of Shah Jahan is greater than Mumtaz Mahal and installed more than thirty years later by the side of the latter on its west.

The upper cenotaphs are only illusory and the real graves are in the lower tomb chamber (crypt), a practice adopted in the imperial Mughal tombs. 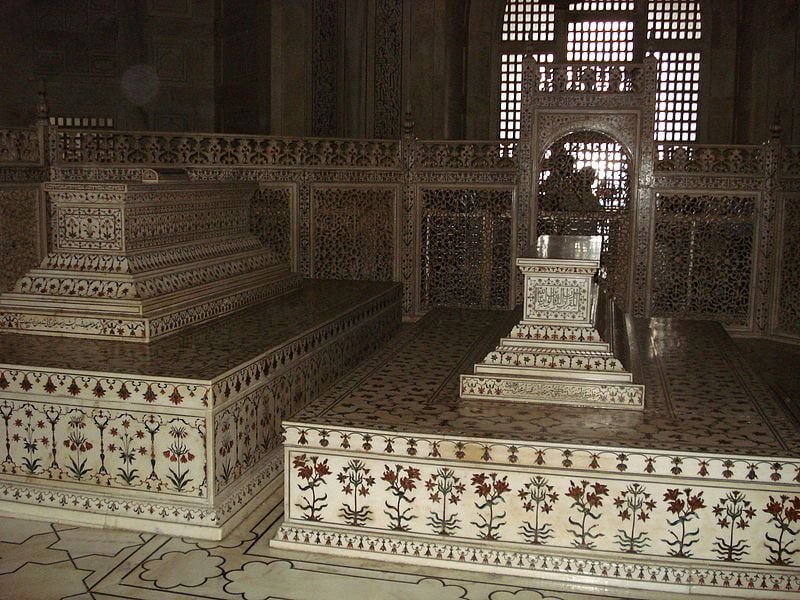 The four free-standing minarets at the corners of the platform added a hitherto unknown dimension to the Mughal architecture. The four minarets provide not only a kind of spatial reference to the monument but also give a three dimensional effect to the edifice.

The most impressive in the Taj Mahal complex next to the tomb, is the main gate which stands majestically in the centre of the southern wall of the forecourt.

The gate is flanked on the north front by double arcade galleries.

The garden in front of the galleries is subdivided into four quarters by two main walk-ways and each quarters in turn subdivided by the narrower cross-axial walkways, on the Timurid-Persian scheme of the walled in garden.

The enclosure walls on the east and west have a pavilion at the centre.

The Taj Mahal is a perfect symmetrical planned building, with an emphasis of bilateral symmetry along a central axis on which the main features are placed.

The building material used is brick-in-lime mortar veneered with red sandstone and marble and inlay work of precious/semi precious stones.

The mosque and the guest house in the Taj Mahal complex are built of red sandstone in contrast to the marble tomb in the centre. Both the buildings have a large platform over the terrace at their front.

Both the mosque and the guest house are the identical structures.

They have an oblong massive prayer hall consist of three vaulted bays arranged in a row with central dominant portal. The frame of the portal arches and the spandrels are veneered in white marble.

The spandrels are filled with flowery arabesques of stone intarsia and the arches bordered with rope molding. 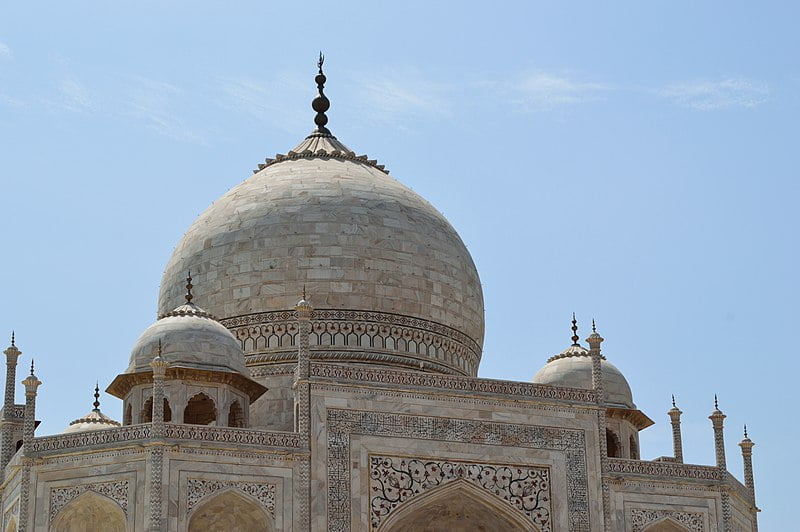 What Is The Current Status Of The Taj Mahal?

Today, the Taj Mahal is listed as one of the New Seven Wonders of the World. But, this magnificent white marbled mausoleum has its own story to tell. It is the final resting place of Arjuman Banu, also know as Mumtaz Mahal.

An area of 10,400 sq km around the Taj Mahal is defined to protect the monument from pollution. The Supreme Court of India in December, 1996, delivered a ruling banning use of coal/coke in industries located in the Taj Trapezium Zone (TTZ) and switching over to natural gas or relocating them outside the TTZ.

The implementation of an Integrated Management plan is necessary to ensure that the property maintains the existing conditions, particularly in the light of significant pressures derived from visitation that will need to be adequately managed.

The Management plan should also prescribe adequate guidelines for proposed infrastructure development and establish a comprehensive Public Use plan.

Some Facts About Taj Mahal

Below are some facts that you may find interesting about Taj Mahal.

1. The Taj Mahal was built by a whopping 22,000 laborers, painters, stonecutters, embroidery artists.

2. Legend has it that Emperor Shah Jahan intended to build another Taj Mahal in black marble across the river but a war with his sons interrupted these plans.

3. The changing moods of the Emperors wife are well captured by the changing hues of the Mausoleum at different times of the day. It takes a pinkish hue in the morning, milky white in the evening and golden at night when illuminated by moonlight.

4. It intricate work of art and architectural genius took 17 years to complete.

5. The most recognizable feature is the white dome at the peak of the mausoleum. Often called the ‘onion dome’, it rises to about 35 meters (115 feet) and is surrounded by four other domes.

6. Taj Mahal is a famous Indian landmark and tourist magnet, attracting more than a million tourists every year.

7. As always, rumor mills are on the overdrive about this mausoleum.

8. It is rumored that the Emperor ordered that all the workers who worked on the mausoleum get their hands chopped of so that no one could make anything like it ever again.

9. If it was to be built today, Taj Mahal would cost the Emperor about US$100 to make it as beautiful as it is.

10. The materials that were used to build Taj Mahal were transported to the construction site by a whopping 1,000 elephants.

11. Many of the precious stones on the mausoleum were ripped off from the walls of the mausoleum by the British army during the Indian rebellion of 1857.

Taj Mahal is indeed a beautiful place. When you visit, make sure you take a picture of yourself and your spouse with the mausoleum as the background. Who knows, the love that the emperor had for his wife to dedicate this kind of resources for her remembrance after death might rub off on you.

1 thought on “The Taj Mahal : One Of The Seven Wonders Of The World”