The Gir Forests- the largest compact tract of dry deciduous forests in the semi-arid western part of India is the last abode of the big and regal predator, Asiatic lion (Panthera leo persica), an endangered animal species.

The sanctuary is internationally acclaimed for successfully saving this precious species from the brink of extinction.

Gir Forests has a topography made up of successive rugged ridges, isolated hills, plateaus and valleys.

Besides, being the last abode of Asiatic lions, Gir Forests forms a unique habitat for many mammals, reptiles, birds and insect species along with a rich variety of flora. 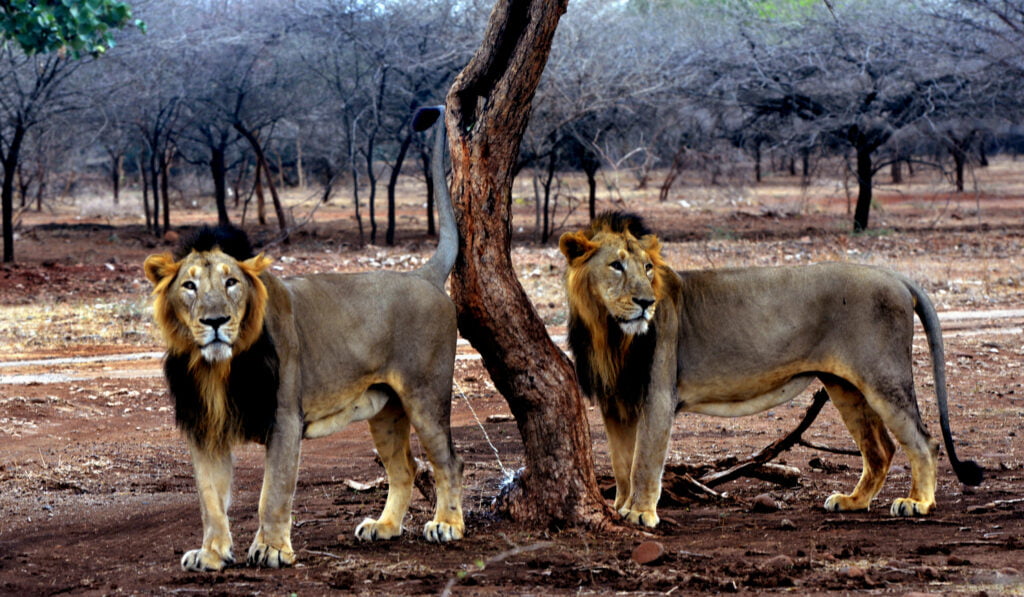 The overwhelming presence of the omnipotent big cat diverts the attention of the common man from the remarkable bird population that the sanctuary has.

However, the birds of Gir sanctuary did attract the great ornithologist, Dr. Salim Ali who believed that, had the Asiatic lions not been there, the area would have been one of the most fascinating bird sanctuaries of the country.

People mostly link Gir with “Maldharis” who have survived through the ages by having symbiotic relationship with the lion. They are religious pastoral communities living in Gir. Their settlements are called “nesses”.

At present, Gir forests of Gujarat (India) is the only place where this race of lions i.e. Asiatic lion is found in its natural habitat.

Unlike the other big cats, lion is tolerant of the presence of human being and it even lives near the human settlements. During the last century in British rule, lion population touched an all time low of 20 in 1913.

The serious conservation efforts by the then Nawab of Junagadh saved the species from the brink of extinction.

The subsequent efforts by the Forest Department has successfully brought the population to the present respectable status of 523 numbers of this majestic animal.

History Of  The Park

In the 19th century, the rulers of Indian princely states used to invite the British colonists for hunting expeditions.

At the end of the 19th century, only about a dozen Asiatic lions were left in India, all of them in the Gir Forest, which was part of the Nawab of Junagarh‘s private hunting grounds.

British viceroys brought the drastic decline of the lion population in Gir to the attention of the Muslim Nawab of Junagadh, who established the sanctuary. 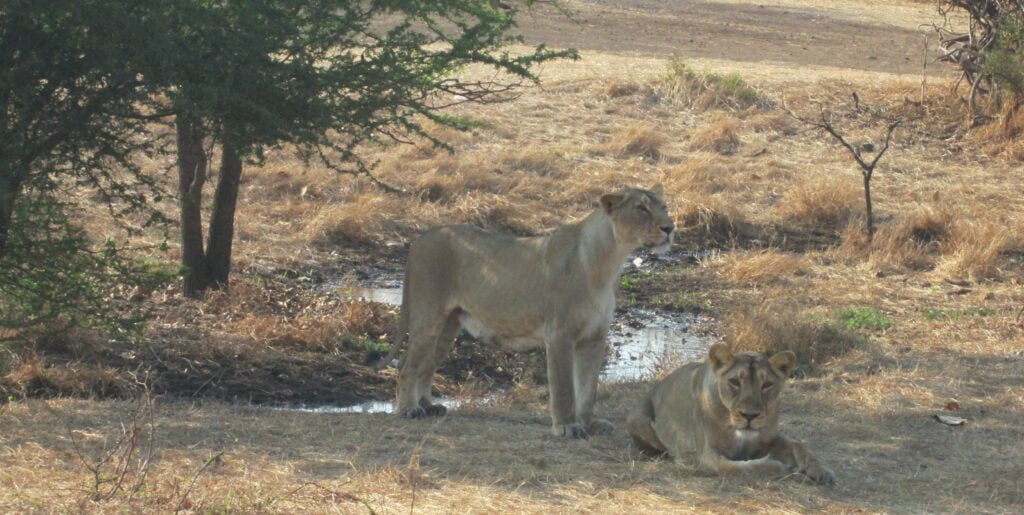 Today, it is the only area in Asia where Asiatic lions occur and is considered one of the most important protected areas in Asia because of its biodiversity.

The Gir ecosystem with its diverse flora and fauna is protected as a result of the efforts of the government forest department, wildlife activists and NGOs. It is now considered the jewel of Gujarat’s ecological resources.

The seven major perennial rivers of the Gir region are Hari, Shetrunji, Datardi, Shingoda, Machhundri, Godavari and Raval. The four reservoirs of the area are at four dams, one each on Hiran, Machhundri, Raval and Shingoda rivers, including the biggest reservoir in the area, the Kamleshwar Dam, dubbed ‘the lifeline of Gir’.

Water scarcity becomes a serious problem (mainly in the eastern part of the sanctuary). Ensuring the availability of water during peak summer is one of the major tasks of the Forest Department staff.

More than 400 plant species were recorded in the survey of Gir forest by Samtapau & Raizada in 1955. The Botany department of M.S. University of Baroda has revised the count to 507 during their survey. Teak bearing areas are mainly in the eastern portion of the forest, which constitutes nearly half of the total area. Several species of acacia are found. Also found here are ber, jamun (Syzygium cumini), babul (acacia), flame of the forest, zizyphus, tendu and dhak.

Also plants like karanj, umlo, amli, sirus, kalam, charal and an occasional vad or banyan tree are found. These broadleaf trees provide a cool shade and moisture content to the region.

As part of the afforestation programme casuarina and prosopis have been planted along the coast borders of gir.

It is valued approximately at ₹ 500 million (US$7.12 million). The forest provides nearly 123,000 metric tons worth of fuel wood annually.

How To Reach There?

National Park attracts large number of tourists to witness the Asiatic lion, as this is the sole place all across the world where these creatures are presently found.

Once extinct, numbers have been recovered owing to the conservation efforts. The Sanctuary is open for tourism from 16th October to 15th June every year.

Junagadh is perhaps the best approach to the park. The railway station in Junagadh receives trains from different cities like Ahmedabad and Rajkot and other major cities. It takes approximately one and half hour to reach Sasan Gir National Park. 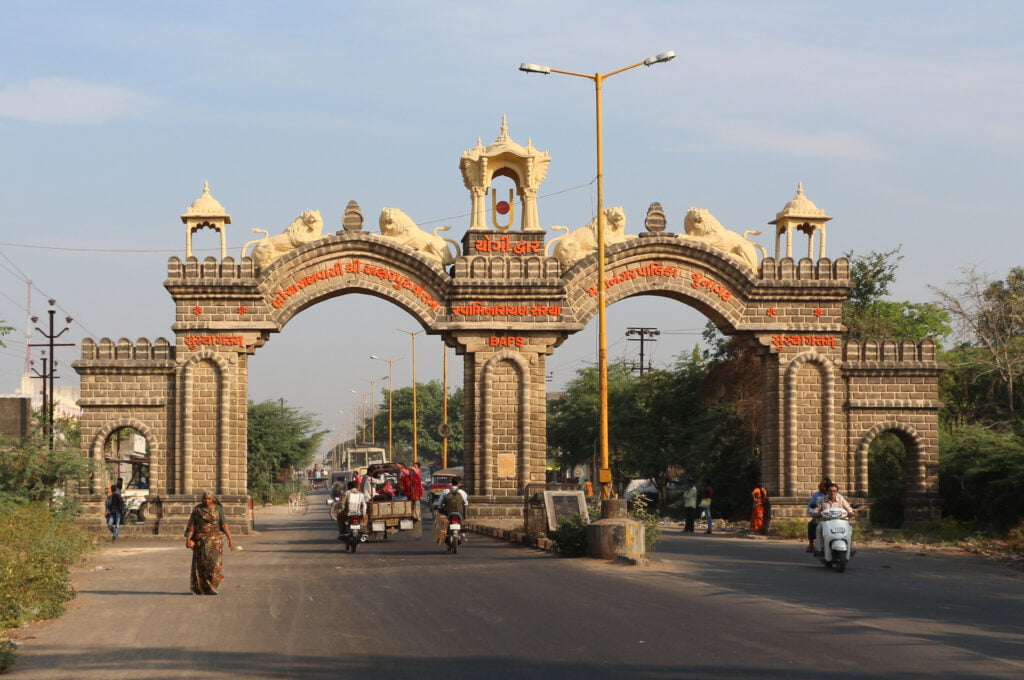 From Rajkot-On reaching Rajkot Railway Station or Airport you can take a cab or bus and to reach a Limda chowk. There are a number of privately operated that go to Junagadh at frequent intervals.

Junagadh is nearly 105 Kms from the city Rajkot and it takes nearly 2 and a half to 3 hours to cover the distance.From this point you have two options.

First one is either you take a bus from gate number 11or 12 to Sasan Gir or travel by taxi that is accessible bang opposite the taxi stand. The taxi will take nearly one and half an hour and will charge reasonably and will drop you to Sasan Gir.

From Somnath to Gir National Park :

Road Distance or the driving distance from the Gir National Park to Somnath is approximately 50 Kms and it takes nearly 1 hour to cover this distance. GSRTC buses and quite a few private buses ply between both the cities and take you directly to Sasan Gir Forest.

From Diu To Sasan Gir Park :

Diu airport is closest to the Gir National Park. From here you can hire that are present just outside the airport which will take you to Sasan Gir. Sasan Gir is nearly 110 kms airport of Diu and takes approximately 2 hours to cover this distance.

If you have a late afternoon flight it is better to take a halt at Diu or can visit Somnath Temple which is nearly 80 kms from Diu and the road too is good except in little patches. It just takes an hour to reach Somnath from Diu. 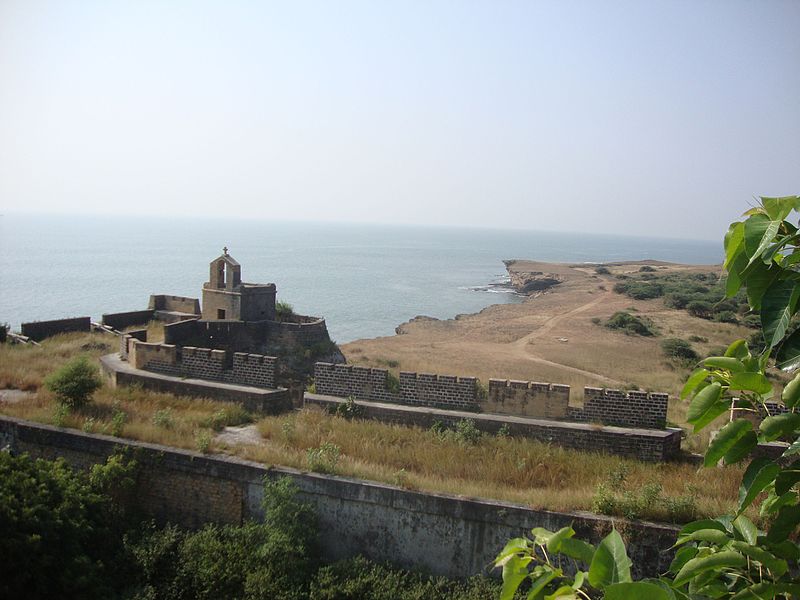 Next morning you can move on to Sasan Gir which is just 40 kms from here and just takes half an hour to cover this distance. Some other routes to reach Sasan Gir by road is from Keshod.

Keshod also has an airport and is 45 kms, Veraval is 40 kms away, Junagadh is 55kms, Rajkot is 160Kms, Ahemedabad is 410Kms. The closeby railway stations are Sasan which is 40 Kms and Rajkot which is 160 Kms.

If you want to visit a similar national park, you can go to Kanha National Park in Madhya Pradesh.

It is well known as the remaining habitat of the Asiatic Lion,gir also has a large leopards Population.As 411 lions and more than 300 leopards have been counted in Gir during last census.

This sanctuary is large population of Sambar and Spotted Deer,chinkara gazelle,Nilgai and Chowsinghathe worls only four horned antelope. Overnight at the Jungle Lodge.

After Lunch get ready for another thrilling game drive. Afternoon Jeep Safari into the Gir Forest National Park / Game drive. Overnight at the Jungle Lodge. 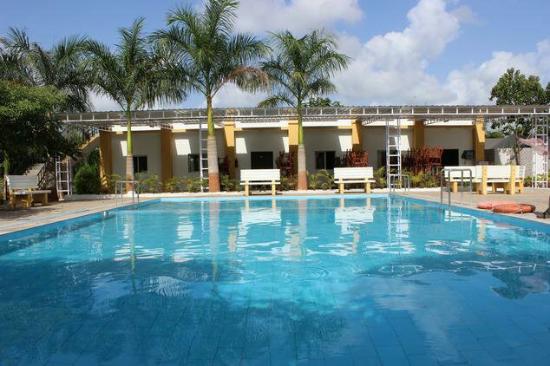 Day 3: Early morning Jeep Safari into the Gir Forest National Park / Game drive Return for breakfast at the lodge. Thereafter check out from lodge and depart for your onward destination.

Day 2: Get up early in the morning and take the most exciting jeep safari inside National Park to see the Asiatic lion again.

After safari back to resort and after having your breakfast check out from the resort and transfer to Diu airport to catch the flight for onward destination.

That is all about Gir National Park. If you visit Gujarat, make sure to visit this place for a fun filled and memorable journey.